The Catalyst, The Film: DVD 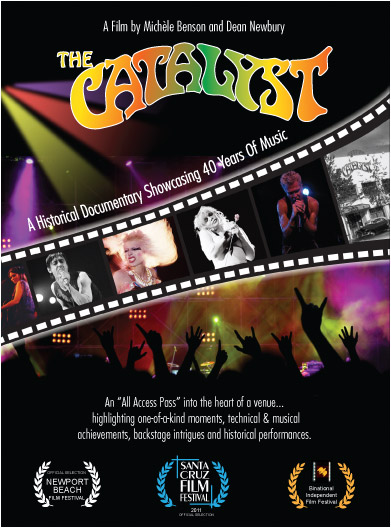 The Catalyst, the film is a historical documentary showcasing 40 years of music at the venue known as The Catalyst in Santa Cruz, California. This bohemian coffee house beginning in the 1960’s, transformed into a world renowned music venue commanding the respect and accolades of a monumental list of top notch international musicians who played there time and time again: The Doobie Brothers, Neil Young, Greg Kihn, David Lindley (El Rayo X & Jackson Browne), Huey Lewis and the News, The Tubes, John Mayall, Ry Cooder, Patti Smith, Bonnie Raitt, Emmy Lou Harris, Crosby, Stills & Nash, SNAIL and many more. The Catalyst served as a jumping off point in the career junction of generations of musicians world wide. Hosted by rock musician, Greg Kihn.

The legacy of The Catalyst is told through the eyes of International rock photographer and director Michèle Benson, Producer, Dean Newbury, and the myriad of musicians who graced her stage. Including private insights into The Catalyst’s own professional cast, crew and the legendary owner himself, Randall P. Kane (1923-2009). This is not a journey of where are these bands today…but rather an insider’s view to what is a venue.

When people think of star-laden, live music venues, they commonly think of New York. Los Angeles. Chicago, even. Beyond that, outside of these music centers, Americans otherwise envision large-capacity arenas that exist as repurposed, corporate-sponsored spaces — principally erected for sporting events.

Few would think of a more modest and intimate space in Santa Cruz, California that originated in 1969 as a combination delicatessen / coffee house. But the likes of Neil Young would certainly think of it as a place where he would “try out” new material before an enthusiastic audience. That venue would be named ’The Catalyst’, and a documentary film from 2011 would chronicle that cherished venue — as well as its ‘way of life’. Now, six years after its initial release, ‘The Catalyst’ returns for an encore screening this St. Patrick’s Day.

The film was directed by Michele Benson — longtime House Photographer at the Catalyst Club — and produced by Dean Newbury. Together, they survey and visually catalog the famous acts that took the stage at the venue, as well as providing insight into the personalities and personas behind the scenes — from bartenders to sound crew, security personnel to owner, Randall Kane, to whom the film was dedicated posthumously.

It is in this captivating musical and visual journey that the screening audience is treated to the array of artist that took to The Catalyst stage. These would include a virtual Who’s Who of Pop/Rock purveyors such as Nirvana, Huey Lewis, Ted Nugent, The Tubes, Hall & Oates, Leon Russell, Billy Idol, Greg Allman, Tina Turner, The Doobie Brothers, Courtney Love, Patti Smith, Ry Cooder, Pearl Jam — all along with surprise cameos such as those by Carlos Santana —  and more contemporarily, appearances by Green Day, among others.

Director, Michele Benson, would pour through hours upon hours of archived footage — along with her own still photography — to help tell the story of The Catalyst. Over the 40 years span, a variety of image-capture formats had to be used with the predictable variations in image quality. But it is the very anomalies in these now-outmoded technologies that actually assist the audience in placing and defining the time — as well as capturing ‘the mood’ of a given timeframe.

“Director, Michele Benson, would pour through hours upon hours of archived footage
— along with her own still photography —
to help tell the story of The Catalyst.”

Benson and producer Dean Newbury seamlessly interleave these visual archives with contemporary interview footage that further tells and propels the story of The Catalyst. Most notable would be the interview segments with The Catalyst’s owner and “visionary”, the late Randall Kane — a man also noted for his unusual and spectacular art collection that adorned the walls of the venue. Where else would you see a statue of Jesus with guitar in hands?